September 24, 2018 at 10:15 AM EDT
Available Only at Select Festivals and Bars in the Northeast, IHOPS Takes its Cue from the Craveable Flavors of IHOP Restaurants' Limited-Time Seasonal Pancake Line-Up

, /PRNewswire/ -- Today, IHOP® announces the release of IHOPS Pumpkin Pancake Stout, a limited-edition, fall-inspired craft beer brewed by that pairs the flavor of pumpkin and seasonal spices with IHOP's World Famous Buttermilk pancakes into a rich, smooth stout. Fans looking to sample IHOPS can find it only at select bars and festivals, across the tri-state area throughout September and October.  IHOPS Pumpkin Pancake Stout is not available in IHOP restaurants.  The seasonal brew was inspired by the breakfast brand's newest promotional menu: Pumpkin Spice pancakes, which is made with real pumpkin, Cinn-A-Stack® pancakes, and the ultimate mash-up, Pumpkin Cinn-A-Stack®. The limited-time pancake line-up is available at nationwide until October 28. 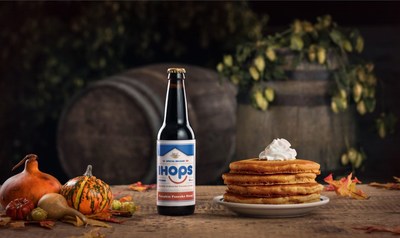 To create IHOPS, the brand collaborated with -based brewery , producers of one of the "Top Ten Stouts in " as rated by The . The innovative flavor profile of IHOPS Pumpkin Pancake Stout is different from other pumpkin-flavored beers as it blends IHOP's signature Buttermilk pancake batter mix with ingredients from its fall menu into a stout.

"Every year, our guests eagerly await the return of our seasonal pancakes:  Pumpkin Spice, Cinn-A-Stack, and a new combination of the two this year, Pumpkin Cinn-A-Stacks, which tastes just like a pumpkin pie and a cinnamon roll married and had a food baby," said , Chief Marketing Officer, IHOP. "Our advertising agency, Droga5, suggested that those same ingredients that make our fall pancakes so delicious would also make a great tasting beer, and we wholeheartedly agreed. So, we partnered with award-winning craft brewers to create IHOPS Pumpkin Pancake Stout, a limited-run beer that can exclusively be discovered at some of the Northeast's top fall beer and food festivals and bars."

IHOPS Pumpkin Pancake Stout will make its debut on at the 5th annual Bacon and Beer Classic beer classic at the in Flushing Meadows, N.Y.

"We're excited to partner with IHOP on this first-of-its kind brew and bring fans a unique craft beer that blends the deep, roasted flavors of our stout with hints of pumpkin, vanilla and IHOP's iconic pancake batter," said , Founder of . "Being able to showcase it at the Bacon and Beer Classic was the perfect launch pad – nothing elevates breakfast or bacon better than pancakes. Now fans can get the taste of IHOP's famous fall pancakes in a beer."

IHOPS Pumpkin Pancake Stout will be available* at the following distributors and beer festivals. For a list of exact location, check out IHOPS.Beer:

* IHOPS Pumpkin Pancake Stout is not available in IHOP restaurants.

ABOUT INTERNATIONAL HOUSE OF PANCAKES, LLC
For 60 years, IHOP has been a leader, innovator and expert in all things breakfast, any time of day. The chain offers 65 different signature, fresh, made-to-order breakfast options, a wide selection of popular lunch and dinner items as well as meals under 600 calories. IHOP restaurants offer guests an affordable, everyday dining experience with warm and friendly service. Today, there are more than 1,750 IHOP restaurants around the world, including restaurants in all 50 states and the , and as well as , , , , , the , , the , , , , and . IHOP restaurants do not hold liquor licenses and do not serve alcoholic beverages. The foregoing does not constitute an offer or advertisement for any alcoholic beverage in any IHOP restaurant.  IHOP restaurants are franchised by affiliates of -based . (NYSE: DIN).

ABOUT KEEGAN ALES
brewed its first batch of beers on (Tommy's mom's birthday) and set out handselling beer to local bars and restaurants early September. The first kegs of , Hurricane Kitty and Mother's Milk went to competition at that month. Mother's Milk took home a gold medal and was honored with People's Choice: Best of Show. has gone on to win many more awards and recognition including in (2009), in (2009) and Best Craft-Brewed Beer in (2009). Early in 2010, The declared Mother's Milk one of the top ten stouts in and has also been awarded 2010 Small Business of the Year by and .